Growth at Launch That

We are finishing up our annual review period at Launch That. This period comes with a big dose of reflection and some real thought put into our growth. Now is the time where team members ask themselves:

These questions and our commitment to continue asking them is ingrained into our culture. Growth is part of the DNA of Launch That.

That culture has led us to move offices to make room for team members more times that I can count. We’ve had more years where we grew our projects in the double and triple digit percentages year over year than not. And each year we document new job descriptions, create more career ladders and explore new ways for team members to contribute.

This would not be possible without team members who pushed our growth.

A few years ago, I visited one of my best friend’s classrooms, Ben Leer. Ben is a former rocketeer and now a math teacher. He had the following poster up in his class: 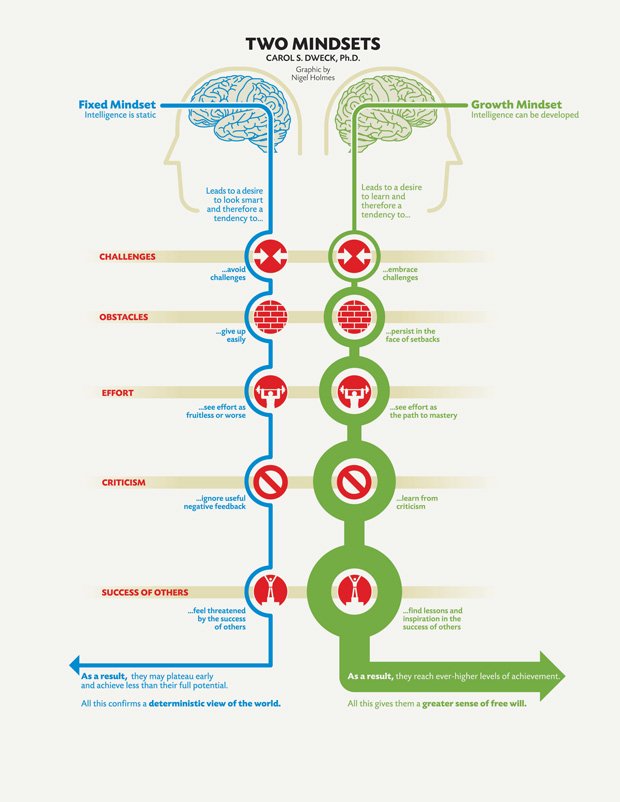 This poster resonated with me strongly. The idea of a fixed vs growth mindset was presented so succinctly, and I found the conclusions enlightening.

The ideas originated from the research of Carol Dweck, a Stanford psychologist. After years of research Dr. Dweck came to the conclusion that a person’s potential begins with the relationship they have to their own qualities – talent, ability, morality, values and personality.

People who believe those qualities are innate have a fixed mindset. They tend to have a desire to give off the impression they are smart, knowledgeable and of high character. Therefore, they avoid challenges outside of their comfort zone, believe effort cannot overcome their innate qualities and are threatened by critical feedback. As a result, they have a plateau view of their own potential.

On the other hand, there are people who have a growth mindset. They believe their own talent, ability, morality, values and personality can all be changed and improved. They have a desire to learn and therefore embrace challenges. They believe effort can overcome deficiencies and is key to development. And they view criticism as a key to improvement. As a result, they believe their potential is unknowable and unlimited.

The dichotomy couldn’t be clearer.

I’d imagine most people’s mindsets fall somewhere in the middle – thinking some of their traits are innate and others are changeable. But the insidiousness of even that idea can lead people to behaviors that look more like a fixed mindset, thinking their growth is stunted by traits that have been predetermined. Once you shift your mindset and consider it a starting point for more development, you can begin to shape a new, better future.

Historically, Launch That has a lot of team members with a growth mindset. I’ve personally seen them around me for over a decade.

And the organization has supported that growth. Team members who began at an entry level became senior contributors, directors and executives. It’s normal to meet someone at Launch That who has been promoted not once, not twice, but three times or more.

Over the past couple of years, I have stepped up how often I speak about growth mindsets. Today we have the posters lined up around the office. I speak about mindsets in relation to challenges we face at the company. And I often speak about how we should look inward for opportunities to improve.

We have more work to do in this area. The fixed mindset is too tempting. A few posters can’t do all the work! It’s not enough to just look inward. A culture is not formed by just the relationship some team members have to themselves – it’s shaped by the relationship we have to each other. And it’s in that area where we still have room to grow.

It’s too easy to think someone else doesn’t have the skills necessary for the job, or they don’t have the right background for it, or they are not a team player. It’s also easy to believe those qualities are not only a description of the present, but the future as well!

Our area of growth is one where we acknowledge the following about each other:

When I look at the reviews of 2021, I see a whole lot of growth. We failed a lot. We learned a lot. We worked hard. We did some things very well. We have some opportunities to do some things better. Knowing that makes us better.

It’s exciting to know that we have a whole lot of people who believe that too!

David Palombo is the President and COO of Launch That. He has been an executive at Launch That since 2013. His core background is in Search Engine Optimization, brand development, digital marketing, and entrepreneurship. His primary focus is to build a world-class team of digital marketing experts, content creators, developers, and creatives who create the most valuable digital brands.